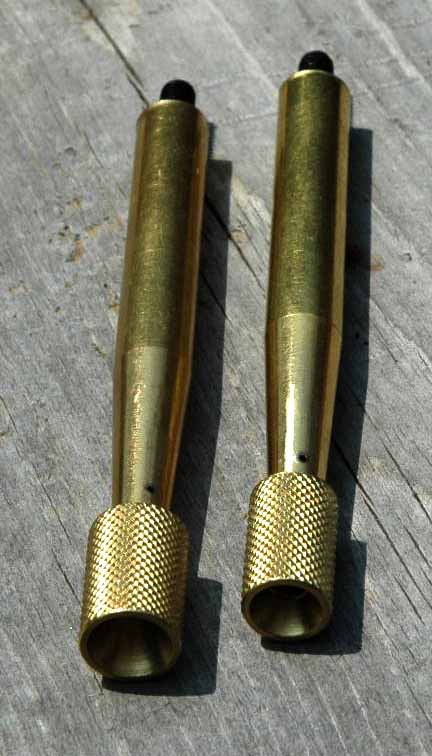 While getting my Encore ready for our annual Caribou hunt I experienced a flyer that could not be explained. The only hint of a problem was the "feel" of the sabot going down the barrel. It was not a smooth, sliding push but rather a stutter motion.

I continued shooting until I experienced the same "feel" on another load. I was not surprised when this bullet was also a flyer; no where near the last flyer.

I continued shooting until I experienced the same "feel" on another load. This time rather than shoot the bullet, I removed the breech plug, pushed the charge through and examined the bullet. It appeared that the Super Jag and the bullet had locked up inside the barrel. The stutter feeling was the sabot being pushed over the lands and grooves rather than rotating in the lands and grooves.

I backed my Super Jag off the face of my range rod by a couple of threads. This would allow the Jag to rotate if the bullet locked up with the Super Jag again. I continued to load my Encore in that manner for the balance of the day and did not have another "stutter load" nor did I experience another flyer.

Over the next few months, I continued to test my theory by allowing the bullet to rotate on one loading while stopping it from rotating on the next. Every shot yielded the same result. Bullets that rotated with the lands and grooves shot better than bullets pushed straight down the barrel.

Six months of design and redesign work and over 1,000 shots of testing has brought us to the introduction of

The world's first and only Rotating Accuracy Tool.
The final tool in achieving absolute muzzleloader accuracy.

January 2008 update
It seems muzzleloader barrels keep getting smaller and smaller. In response to this we have reduced the size of our .50 Super Rat by .005". Add one to your next bullet order and it will be shipped FREE.