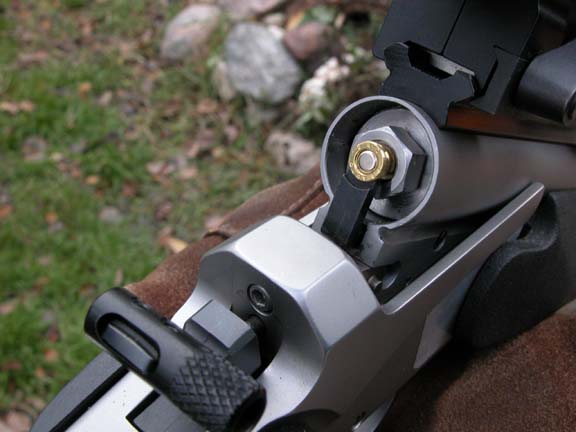 Above: T/C Encore Pro Hunter after a day at the range. Note the lack of fouling in the breech and receiver area. Our .25 ACP breech plug completely seals the breech while still allowing the swivel extractor to function. Very cool.

Originally Posted 2003
Too much flame; too much fouling:
Our Encore gets so dirty from the 209 primer that after 50 shots my firing pin will not even travel far enough to ignite the primer. I need to remove the butt stock and clean the entire action with brake clean and compressed air before it will work. Too much flame trying to get through the small hole.

Too much energy:
I have no idea who started the 209 craze but I believe that it provides way more energy than is required to get the job done. Try this experiment for yourself. Take your ramrod with a jag and a clean damp patch, push it all the way down the barrel of your Encore. Mark the ramrod where it meets the end of the barrel with a strip of masking tape. Put a 209 into the breach plug, close the gun, cock the hammer and pull the trigger. With our Encore, the ramrod will get blown 6"- 8" up the barrel with just the force of the 209. If we do the same experiment with our .25ACP Encore breech plug with it's small rifle primer, the ramrod moves less than 1".

We have all but eliminated those unexplained flyers from our Encore groups. Personally, I believe these flyers were the result of the 209 actually lifting the sabot off the powder charge simultaneous with igniting the powder. The much milder Small Rifle primer of the 25 ACP case ignites the powder just as instantly but lacks the energy to move the sabot and bullet off the powder charge therefore eliminating the flyers.

To sum up, I love this conversion. The Encore is now perfectly clean inside and out shot after shot. I have eliminated the flyers caused by the excessive 209 energy levels. I find the .25ACP cases very easy to install, remove and find in my pockets. One case has been primed over 100 times with the primer pocket fit as snug as it was when we first used it. We decap and prime the cases with the very economical Lee line of reloading equipment. As you lose them, you simply replace the ACP cases for about .10 each.

Mailing instructions will be provided at the time you place your order. Questions, call Cecil on the toll free.