No other muzzleloader has caused quite the same impact on the blackpowder shooting world. We get customers calling who can shoot sub 1" groups at 200 yards while the next caller can't put three shots on a 2' x 2' sheet of plywood at 50.

Well, yesterday was our turn. My good buddy Gene Callins picked up a Blued/Walnut 209 x50 and we got to experience exactly what hundreds of you already have. Although I accurize muzzleloaders, we agreed to take the gun out of the box, scope it and go shooting. Believe me, it's been a very long time since I shot any gun that I didn't spend hours working on before taking it out. This was quite the change. I selected the weights and models of bullets that we would recommend to any customer.

Each target was making the same shaped group which is an indicator that something needs attention. We also knew that we would never be able to achieve great accuracy with the 5 1/2 pound trigger pull. We returned to the shop to find the problem with the gun and correct the trigger.

Upon stripping the Encore we observed that the butt stock was loose and the forend was rubbing quite hard on the receiver. An Allen wrench cured the loose butt stock. 400 grit sandpaper would cure the rubbing on the receiver. Now we just need to get the bear of a trigger down to between 2 1/2 and 3 pounds. T/C has agreed to rework the action to get the trigger down but it must be returned to the factory.

Overall, I felt the results were quite impressive for an out of the box gun. I will update this article after we re-shoot the Encore with the minor tweaking having been completed.

We never were very big on patience so Gene gave me the green light to fix the trigger rather than return it to T/C. However long the wait would be, it would definitely be too long. Although I have never seen the inside of an Encore action, it only took a few moments to figure out what needed to be done. Less than 30 minutes later, we had a crisp, clean 40 ounce trigger that was indeed a treat to use.

The forend was another matter. We anticipated only needing some light sanding to clear the receiver but it ended up taking some serious work with a wood file and some 60 grit sand paper to relieve the rubbing. Once the correct amount of walnut was removed, we covered the bare wood with linseed oil. We were now ready to return to the range and test our "new and improved" Encore.

Time was limited, so we decided to use the .40 QT Polymer Tip in 195 grain. We would use the same charge as before to determine whether in fact our accurizing work did benefit the functioning of the gun. 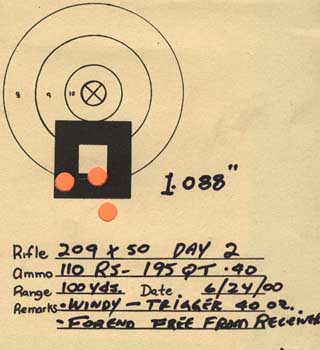 The target says it all. We shaved almost 1/2" off the group size and we are convinced that by adjusting bullet weight and powder charge, we can easily get the Encore groups down to 5/8" - 3/4". We will leave the fine tuning of the powder charge and bullet weight for Day 3. We will keep you posted.

We finally got out for Day 3. Our goal was to adjust powder charge and bullet weight to see how well the Encore would actually shoot. Although it was very hot and humid, the conditions were by far the best we had had to date. We used Pyrodex RS as well as pellets. We continued to use CCI Magnum primers. As time was somewhat limited, we elected to only try the .40 QT Polymer Tips in 195 and 215 grain.

I believe that this will conclude the testing of the Encore. We could go on week after week but I think we proved our point. We took an out-of-the-box gun and with a little common sense, a little target analysis and a little work, we got a great shooter.

We do not know if we have a good one or a bad one. The inside of the barrel is flawless. The wood work and fit is first rate. It looked like it should shoot and it does. Gene and I will continue to test with it because the 209x50 Encore has taken the first step to becoming Gene's "Muzzleloader of Choice" this fall when we attempt to shoot a White-tailed Deer at 350 yards on video.

We managed to horse-trade an Encore for one of my .17 Remington. Now that we had one of our very own, I felt I would have a real opportunity to wring it out. We started by applying what we had learned from Gene's and did the trigger and freed the forend before shooting.

The gun shot well but was very inconsistent. After a lot of frustration, we determined that the pin used to attach the barrel to the receiver was moving causing lots of problems. One day the gun would shoot sub 1" groups exactly where you wanted. The next day, same load would shoot 3" groups and be 5" left and high. I grabbed a piece of tool steel and turned a .001" larger pin. Instantly things stopped moving and the accuracy we were able to achieve could be repeated day after day. Group sizes could now be counted on to stay around 1" with a variety of loads.

I did another horse trade and got a 22-250 barrel for the Encore action. With the new pin, this barrel shot better than I would believe if I had not seen it myself. I found several loads that would easily shoot .5" groups and better at 100 yards. This got me back thinking about the muzzleloader barrel. Maybe there was more left to "wring out" of the Encore muzzleloader.


To this end I stripped the fixtures from the barrel and centered it in my 4 jaw chuck. We were going to cut the "QLA" portion of the barrel off and machine a new target style crown. In the cutting process, we determined that the QLA was actually .012" off square. I expected big things from the new crown and was not disappointed. I believe at this point we will leave the Encore alone and just enjoy shooting it. I'm looking forward to T/C making .45 Encore barrels with the correct 1:28" - 1:30" so I can achieve the same magic from our .357 PTS bullets that we achieved with the .40 PTS in the .50 caliber. 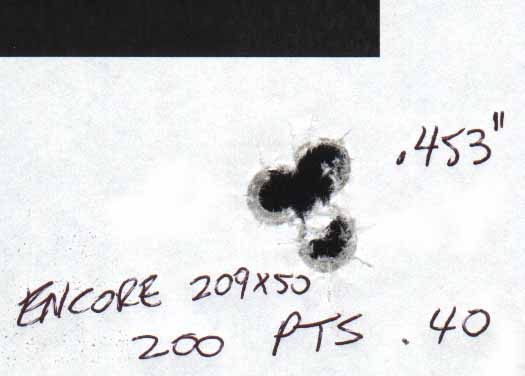