A testimonial: Precision Rifle's Dead Center and the Savage 10ML-II 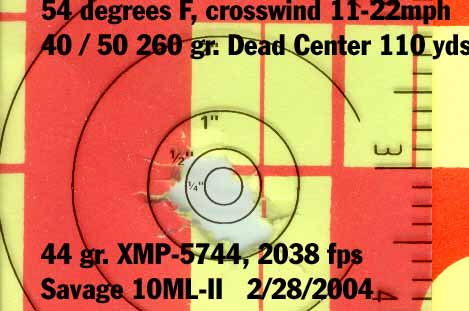 "Having had the opportunity to shoot hundreds and hundreds of rounds through the 10ML-II, there are a few combinations that have yielded consistently outstanding results, day after day, shot after shot. While many powder weights and bullets weights are workable, it is not the intent to list all possibilities—only those that have shown themselves to be exceedingly consistent. Coupled with this is the omnipresent issue of “every gun is an individual,” meaning no listing of personal observation can hope to be optimal data for all guns, under all conditions.

POWDER: While many smokeless powders have proved functional, the easy choice is Accurate Arms 5744, with charges by weight from 44 to 47 grains with all of the above. Those ready to chronograph their loads will likely find what I have observed; that being that muzzle velocities from 2000 fps to 2100 fps are ideal. All these charges, with all the above saboted projectiles, are easy 200 yard plus maximum point blank range loads assuming a six inch kill zone. There is little more to be asked of a muzzleloader for 99% of hunting opportunities, in my opinion. Accurate Arms 5744 has shown to be an outstanding powder in several ways. It ignites easily, and I have yet to have one single misfire with this powder. It is very forgiving, and variations of a couple tenths of grain in weight do not appreciably affect point of impact with the listed bullets. The short cut extruded powder meters well, and use with the Lee 3.4 cc yellow dipper (45.2 grains equivalent) in volumetric loading has given sub-MOA accuracy with all four of the above Dead Centers bullet weights.

Accurate Arms 5744 is also clean burning. After over 300 shots, it took only two patches of Hoppe’s #9 solvent soaked patches over a brass brush to clean the bore. The third patch extracted no fouling residue; the fourth (dry) came out snowy white. No plastic fouling was present. Accurate Arms 5744 is also very easy on the breech plug vent-liner, in terms of erosion. After well over 320 shots, there was no appreciable vent-liner wear—and the groups remained sub one inch at 100 yards. No charge was ever used exceeding 50 grains by weight, with the majority at 46 or 47 grains. Finally, after all these shots, I was able to unscrew the breech plug by hand, with finger pressure only.

Those electing to use non-smokeless powder will find 110 to 115 grains of Hodgdon Triple Seven FFg a formidable combination with the 240 gr. .40 / 50 Dead Centers. While losing the maintenance free and low cost per shot features of Accurate Arms 5744, and the inability to fire 300 gr. class projectiles at 2100 fps, the 240 Dead Centers / Triple Seven combination is still a 200 yard MPBR load, and a sub-1” accurate load in my test gun. The notion that Triple Seven or Pyrodex is more erosive to Savage vent-liners than smokeless powder is completely wrong. If anything, it is less erosive—with 400 shots giving no visible change in accuracy. Immediate cleaning after shooting T 7 or Pyrodex remains mandatory, however.

PRIMERS: Federal 209A shotshell primers remain the preferred 209 primer in all my in-line firearms, still completely misfire-free, and offering a “free” velocity increase of 30 to 40 fps when used with Accurate Arms 5744 when compared to other brands of primers."