Left photo: 209 primer without correct head space. Note the primer is actually pushed out of the battery cup. This jams the 209 inside the bolt between the leading face of the extractor and the bolt face itself. If your primers look like this, your Savage has headspace issues.

Right photo: 209 primer with correct head space. The primer is still flush within the battery cup. Improved safety, finger removal of the 209 and a perfect seal are several of the benefits of a properly head spaced breech plug.
Head spaced Savage Breech plug
Posted September 19th, 2013 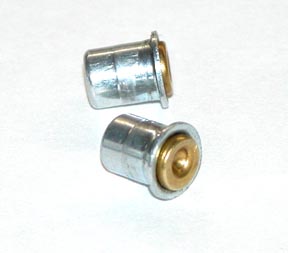 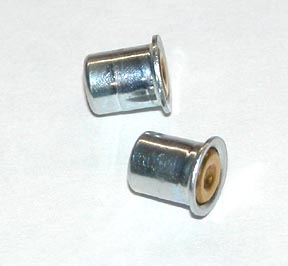 Things that don't work properly drive me crazy. Savage 10MLII breech plugs are not headspaced from the factory. Every time I fire the Savage, I end up with a 209 that looks like the one on the left. The back pressure through the vent liner blows the primer back out of the battery cup. This jams the lip of the battery cup in the front of the extractor groove and the primer in the face of the bolt. To remove the 209, I either need a screwdriver to pick it out or a pair of pliers to pull it out. Or I can re cock the bolt, dry fire the gun and hope the blow from the firing pin pushes the primer back into the battery cup so I can remove the 209 with my fingers.

The last day I could not get the primer out of my bolt at the range was also the last day I ever had this problem. Leaving the range totally disgusted, I vowed to solve the problem or scrap the gun completely. Several days of mulling and tweaking yielded the solution.

September 19th, 2013: Effective this date we offer a #416 Stainless Steel head spaced breech plug for the Savage 10 ML2 Muzzleloader. It has an actual machined bottom where the 209 primer is correctly head spaced to eliminate primer movement in the battery cup of the 209. Easily removed with a 3/8" and compatible with all existing Savage-style vent liners.
Available in our shopping cart, the Savage Head spaced breech plug is only $59.95